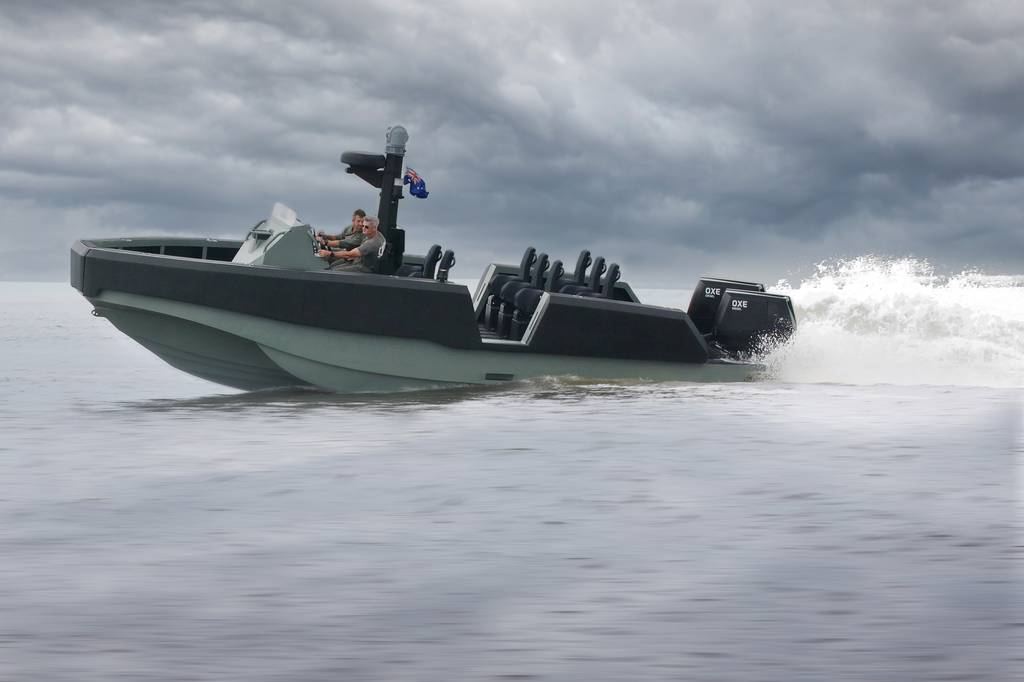 WASHINGTON — The mashup of an Australian small boat designed for safety and an American sensors and communications suite that helped Marines secure the Kabul airport during the August evacuation may help fill a capability gap as the U.S. Marine Corps eyes distributed operations in the Pacific.

Australia-based company the Whiskey Project is pitching its multimission reconnaissance craft (MMRC) as a way to meet the Marines’ needs to “sense first, see first and strike first” — in a craft with a low enough signature that it’s hard to detect, but has powerful organic and remote sensors and a communications package that can report back to decision-makers, company officials say.

Darren Schuback, managing director of the Whiskey Project, told Defense News in an Oct. 11 interview at the Association of the U.S. Army’s annual conference he sought to build a better small boat after serving for 25 years in the Australian Navy as a diver and seeing firsthand the injuries that go along with riding in small combatant craft.

“After witnessing a number of those, and specifically conducting an investigation into one, I soon realized that it wasn’t just an issue that Australia was facing: it was actually an issue that was a global issue,” he said.

After undertaking a feasibility study that included mapping out the safety issues with traditional small boats and the potential mission sets and then designing a craft with them in mind, he’s now pitching MMRC as a way to conduct traditional rigid-hull inflatable boat (RHIB) missions like blue-water visit, board, search and seizure (VBSS) as well as traditional combatant craft missions like riverine operations. The boat, he said, reduces the shock personnel onboard face by 40 percent, has integrated ballistic protection and keeps the crew and passengers drier than a RHIB, among other improvements.

The real power of the craft is the payload it carries: the Whiskey Horizon Strike package developed by Aries Defense, an American company that specializes in integrating new hardware and software with existing military technology.

Douglas Pillsbury, the chief executive of Aries Defense, said during the interview his company previously integrated sensors for ground troops into existing tactical networks, allowing commanders back at headquarters to see what troops were witnessing on patrol. Now he’s bringing that system to the maritime environment by pairing it with the Whiskey Project MMRC.

Calling the artificial intelligence-enabled Whiskey Horizon Strike the “brain in the boat,” Pillsbury said it allows active and passive sensors to collect information and display it in two existing tactical tablets mounted on the boat: the Marine Air-Ground Task Force Common Handheld and the Android Tactical Assault Kit app on a tablet.

From there, the situational awareness information can be passed to small units ashore, to sailors on a ship farther from the adversary or to planners back at a headquarters via existing radio connections — an L3Harris Technologies, TrellisWare or Persistent Systems radio, for example. The comms package can even share the same information to headquarters and to allied forces at the same time on two different channels, he said.

Prior to integrating the sensor and comms package onto the boat, Pillsbury said, the Marine Corps tested a version of this package at Marine Corps Air Station Cherry Point in March. He said the demonstration was “very successful, and we got a great after-action review from the military on that.”

Through Aries Defense’s work with Marine Corps Systems Command, the package has gone through several developmental and operational tests this year and was even fielded with the 24th Marine Expeditionary Unit when elements of the MEU were sent in to assist in evacuating Americans and Afghans from Kabul in August.

Pillsbury said his system helped provide security and surveillance around the airport during the non-combatant evacuation operation, giving the service a sense of how the system performs in a real environment.

Another upcoming formal test event in December with Marine Corps Systems Command and the Naval Information Warfare Center could lead to this package being fielded to meet existing Marine Corps surveillance needs.

“We’ve done some of the formal testing of this capability, but what’s exciting is the expandability and where we can go with the technology. Everything on the boat is already plugged into the programs of record, so it lowers risk for the U.S. military because all the technology’s already integrated into the systems and communications protocols they’re already using, so it just instantly integrates us in to what their [concepts of operations] are,” Pillsbury said, adding that the integration would be equally seamless when the package goes to sea on the Whiskey Project MMRC.

Pillsbury said the boat and the mission package complement each other; because the boat is so stealthy, it can get close to an enemy position and raise its sensor-laden mast to see over the horizon and report back. Or, he said, for a more advanced threat the boat could stay back a bit and send its drone up 400 feet in the air for over-the-horizon sensing.

The Marine Corps has announced an urgent need requirement the Whiskey Project is targeting with its MMRC, and this week it will demonstrate the craft at Camp Lejeune, N.C.

Schuback said it’s unclear exactly when the Marine Corps will decide how to fill the urgent need.

He added the company is also on contract with the Australian Defence Force to develop and deliver a number of these craft over the next year and a half.